close
We've sent you an email with a link to update your password.

A password reset email has been sent to the email address on file for your account, but may take several minutes to show up in your inbox. Please wait at least 10 minutes before attempting another reset.

Registering for this site allows you to access your order status and history. Just fill in the fields below, and weâll get a new account set up for you in no time. We will only ask you for information necessary to make the purchase process faster and easier.

It is widely recognized that a customer's experience and satisfaction with an energy-saving product influences how long a product remains installed and its ability to continue saving energy over time.

Some products have a short life in the home, such as whole-house energy monitors. These devices had a "mean time to kitchen drawer" often measured in days rather than years. With respect to Tier 2 Advanced PowerStrips, customer satisfaction and persistence rely heavily on the product's ability to work as intended and not negatively impact a user's TV watching experience.

In February of 2016, a comprehensive customer satisfaction survey for <Tier 2 Advanced Power Strips was published by Pacific Gas & Electric. The survey was conducted by ILLUME Advising® on behalf of clients and sponsors TechniArt®, PG&E, and San Diego Gas & Electric®. The survey results were published as an appendix to a PG&E Emerging Technology (ET) report identified as ET13PGE1441. The report is publicly available on the Emerging Technologies Coordinating Council1 website2 , and the ILLUME survey appears as "APPENDIX 4: SCALED FIELD PLACEMENT SURVEY REPORT" starting on page 45 of the ET report.

This article illustrates how the core sensing technology which determines user presence or engagement in a Tier 2 APS product influences user experience. User experience directly correlates to how long a product remains installed and in use (persistence).

A Tier 2 APS work on the premise of switching off a TV and peripheral devices if a user is absent or not otherwise engaged. To work correctly and neither disrupt a user's TV watching experience, a Tier 2 APS device must accurately determine user presence and engagement with their TV system. Correct determination of presence/engagement equates to good energy savings. Incorrect determination of presence results in a bad user experience and false energy savings.

Different manufacturers adopt different technologies to determine user presence (sometimes used as a proxy for engagement) with a TV system. One manufacturer uses an external infrared (IR) sensor to detect the presence of IR remote control signals. The central assumption with this approach is that if IR remote control signals are being generated within a specified time period, a user is present. If no IR remote controls signals are detected within the specified time period, then it is assumed the user is no longer present or engaged, and the TV and peripherals are automatically switched off. This assumption is fundamentally flawed for a number of reasons: An IR remote may be used to turn the TV on or off, but many times the channel, volume, or input is controlled using a non-IR remote control technology. This is where an IR-only Tier 2 APS disrupts a user's TV viewing experience and negatively affects the persistence of the Tier 2 APS device.

TrickleStar uses a different approach to determine user presence and engagement with a combination of IR remote control signal detection and motion sensing. This solution is called a "multi-sensor" to distinguish it from the IR-only external sensor used by other manufacturers. Three years ago, TrickleStar discontinued sale of IR-only sensors in Tier 2 APS devices after numerous complaints of unwanted active shutdowns while users were watching TV. These active shutdown events were later validated by the ILLUME report referenced by this article.

The PG&E report shows evidence of a significant difference in active shutdowns between IR-only sensing and IR/OS (IR + occupancy sensing). 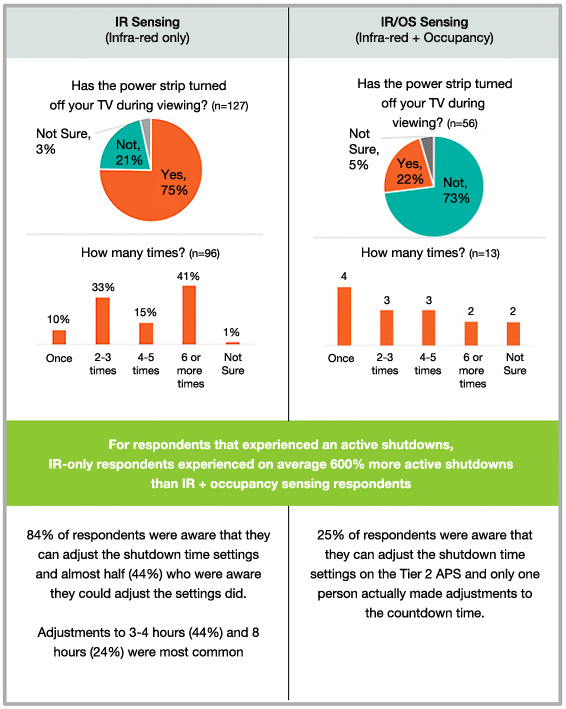 Reports from the Tier 2 APS IR-only sensing advanced powerstrip programs in Victoria and the Australian Capital Territory in Australia (known as SPC's - Standby Power Controllers) report that an alarming number of products were de-installed. What many originally believed to be a 16% de-installation rate now looks optimistic as recent reports of a de-installation rate in -excess of 70% after less than two years after measure deployment are now surfacing.

De-installation reports suggest that with an IR-only sensing Tier 2 APS, users regularly experience negative viewing experiences because the IR-only Tier 2 APS switches off their TV and peripherals viewing far too frequently while they are viewing TV. This is further supported in the PG&E report by the significant percentage of IR-only survey respondents who extended the timer period to two hours or longer from the default setting of one hour.

The overly simplistic assumptions of how a user interacts with their TV are revealed by the PG&E report and in the extremely high de-installation rates of IR-only Tier 2 APS reports from Australia. Manufacturers and program administrators ignore the customer experience with energy saving products at their own program risk. When users become frustrated with too many active shutdowns with a Tier 2 APS, they remove the product. For an energy saving measure that relies on savings to perform continuously for a 5-7 year estimated useful life period, a de-installation rate of >75% within two years of measure deployment is suboptimal. 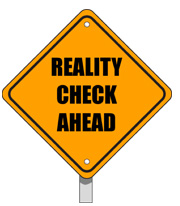 The PG&E report demonstrates that customer satisfaction and active shutdown events are strongly and positively correlated. The most critical element of a Tier 2 Advanced PowerStrip is the ability to accurately and correctly determine user presence and engagement. Energy savings can be achieved by switching off the TV when a user is not engaged or present, but switching off a TV mid-viewing creates a poor user experience. IR-only sensing technology is an overly simplistic solution that places users under pressure, forces them to behave in a specific way, and delivers significantly more active shutdowns. An overly aggressive approach to savings with IR-only sensing technology is to the detriment of user experience. While it may deliver slightly higher initial savings, evidence suggests that a product which negatively impacts the user experience is far more likely to be uninstalled.

Products which interact with users in a more natural way with advanced sensing capability remain installed longer and ultimately deliver higher overall savings. The PG&E report did not explore the overall effects on energy savings due to a high rate of incorrect active shutdowns. More research is required in this area. Further research is also required on the persistence of Tier 2 APS products. Programs are being designed based on de-installation rates of 16% where in reality the de-installation rates of IR-only Tier 2 APS products are significantly higher.

Appendix 1
ILLUME conducted the qualitative surveys as a compliment to the quantitative energy data gathered from two phases of field testing for Tier 2 APS. The first phase of field testing ran from October 2014 through January 2015 and focused exclusively on an "IR model" of a Tier 2 APS by a specific manufacturer. The second phase of field-testing ran from March 2015 through June 2015 and tested exclusively the "IR/OS (IR plus Occupancy Sensing) model" by TrickleStar.

The largest influence on overall customer satisfaction identified by ILLUME with respect to Tier 2 APS was the occurrence of "active shutdowns." The definition of "active shutdowns" is illustrated in question U2 of the survey: "Has the power strip ever turned off your TV while you are someone else was watching TV or playing video games?" Question U2 was only asked if the respondent gave a "yes" response to question S3: "Are there any features or functionality that you dislike?" Specifically, the presence of active shutdowns was a negative influence on customer satisfaction and the related persistence assumptions identified in the survey. ILLUME concludes in their report, "respondents that experienced a device shutdown while viewing television had significantly lower satisfaction than those that did not experience one." From the overall survey respondents (both IR and IR/OS models), 108 respondents reported experiencing an active shutdown while 68 respondents reported not experiencing an active shutdown.